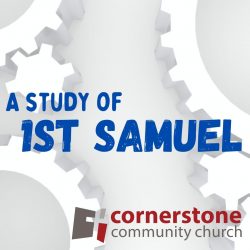 Elkanah and His Family

1 There was a man named Elkanah who lived in Ramah in the region of Zuph in the hill country of Ephraim. He was the son of Jeroham, son of Elihu, son of Tohu, son of Zuph, of Ephraim. 2 Elkanah had two wives, Hannah and Peninnah. Peninnah had children, but Hannah did not.

3 Each year Elkanah would travel to Shiloh to worship and sacrifice to the Lord of Heaven’s Armies at the Tabernacle. The priests of the Lord at that time were the two sons of Eli—Hophni and Phinehas. 4 On the days Elkanah presented his sacrifice, he would give portions of the meat to Peninnah and each of her children. 5 And though he loved Hannah, he would give her only one choice portion because the Lord had given her no children. 6 So Peninnah would taunt Hannah and make fun of her because the Lord had kept her from having children. 7 Year after year it was the same—Peninnah would taunt Hannah as they went to the Tabernacle. Each time, Hannah would be reduced to tears and would not even eat.

8 “Why are you crying, Hannah?” Elkanah would ask. “Why aren’t you eating? Why be downhearted just because you have no children? You have me—isn’t that better than having ten sons?”

Hannah’s Prayer for a Son

9 Once after a sacrificial meal at Shiloh, Hannah got up and went to pray. Eli the priest was sitting at his customary place beside the entrance of the Tabernacle. 10 Hannah was in deep anguish, crying bitterly as she prayed to the Lord. 11 And she made this vow: “O Lord of Heaven’s Armies, if you will look upon my sorrow and answer my prayer and give me a son, then I will give him back to you. He will be yours for his entire lifetime, and as a sign that he has been dedicated to the Lord, his hair will never be cut.”

12 As she was praying to the Lord, Eli watched her. 13 Seeing her lips moving but hearing no sound, he thought she had been drinking. 14 “Must you come here drunk?” he demanded. “Throw away your wine!”

15 “Oh no, sir!” she replied. “I haven’t been drinking wine or anything stronger. But I am very discouraged, and I was pouring out my heart to the Lord. 16 Don’t think I am a wicked woman! For I have been praying out of great anguish and sorrow.”

17 “In that case,” Eli said, “go in peace! May the God of Israel grant the request you have asked of him.”

18 “Oh, thank you, sir!” she exclaimed. Then she went back and began to eat again, and she was no longer sad. 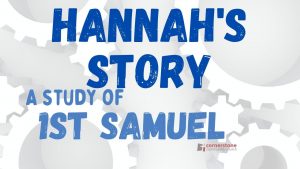 Pastor Ben begins a new series today on 1 Samuel, and starts by looking at “Hannah’s Story.” Looking at 1 Samuel 1:1-18, Ben looks at four characters in the story, how they might resemble us, and how we can take a step closer to Jesus.

We are streaming our service live on YouTube starting at 10:45 AM. You can join us by going to our YouTube channel to find our live-stream. See you there!